Mr. Stitches is a local race car legend.  In the early 60’s, Johnnie Gaither would race at the local track known as the 75/80 Raceway.

At that time, ethnicity was still a major factor in all areas, especially racing.  Mr. Gaither is African American and as the owner and driver of Mr. Stitches, he broke many records and barriers.  He and his car became local legends in Frederick County, Maryland.

Mr. Gaither was an upholsterer and that is how Mr. Stitches got its name.  People often do not remember names but anyone who had anything to do with racing, whether watching or participating, knows what Mr. Stitches is.

Following is a newspaper article that the Frederick News Post did to highlight the restoration of Mr. Stitches after a devastating fire in which the car was destroyed.

This article was reprinted with permission. 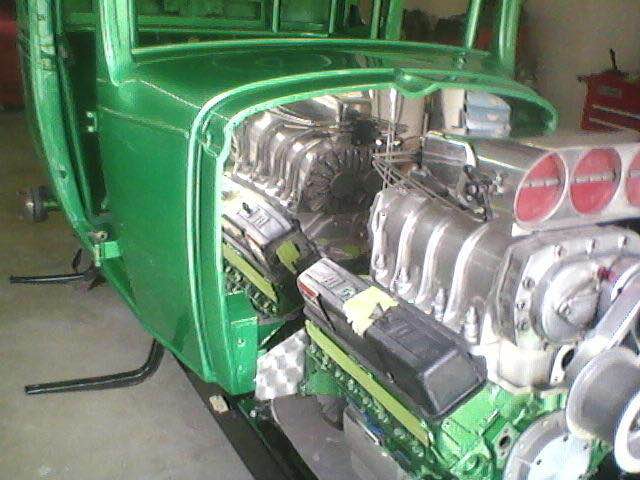 Mr. Stitches is a legend in the Frederick racing community.

That was the name of the 1931 Chevy classic street rod driven at the 75-80 Dragway in Monrovia, and its driver, Johnny Gaither,

broke many records there.

The car was named after Gaither, who earned the nickname while running an automobile upholstery shop. The car was bright, shiny, grass-green, and came complete with a rumble seat, wire wheels and a running board. And it was fast.

Gaither, now 88, was a leader in another arena as well — he was one of the first black men to race cars in Frederick County.

He stopped racing in the late 1960s, but took to bringing Mr. Stitches to local car shows, such as the annual car show at Maranatha Community Church on Byte Drive.

In 2007, Gaither received the Old Timers Award for his contributions to the racing community.

Then misfortune struck. In spring 2010, Gaither’s garage caught fire. Mr. Stitches was inside. Gaither tried to get the car out. Twice.

Once the fire was extinguished, nothing remained of the car but a badly burned frame. Gaither was heartbroken.

So were many other people who had enjoyed watching the car race at the drag strip or had seen it tooling around town.

Dale Grimm, owner of a local auto service and body shop, couldn’t bear to give up on this chunk of Frederick history.

He offered to restore the car on his own time and his own dime.

“I saw this car race when I was a kid, and I considered it an honor to help to bring it back to its original glory,” said Grimm, adding he had heard many stories about the car’s history since he started working on the car.

Since June, Grimm and Steve Proctor, who owns a body shop across the street from Grimm’s, have worked on the car three or four evenings a week. Their efforts are slowly bringing the car back to life.

“It’s quite a challenge,” Grimm said. “Most of the parts are unavailable, so I look at swap meets, improvise and sometimes have to make a replacement part with what I have.”

The wood interior is being replaced with metal, and the metal exterior that was swollen and misshapen from the fire’s heat is being hammered back into its original shape.

Grimm said his goal was to get the car moving by summer and to let Gaither take a ride.

Grimm has been asked to bring the car to the car show at Maranatha this summer.

Gaither, who stops by on occasion to see Mr. Stitches, said he was pleased with the restoration’s progress.

“It was a devastating fire, but I’m happy to see Mr. Gaither smiling again,” Grimm said.

STAY CONNECTED WITH US:  